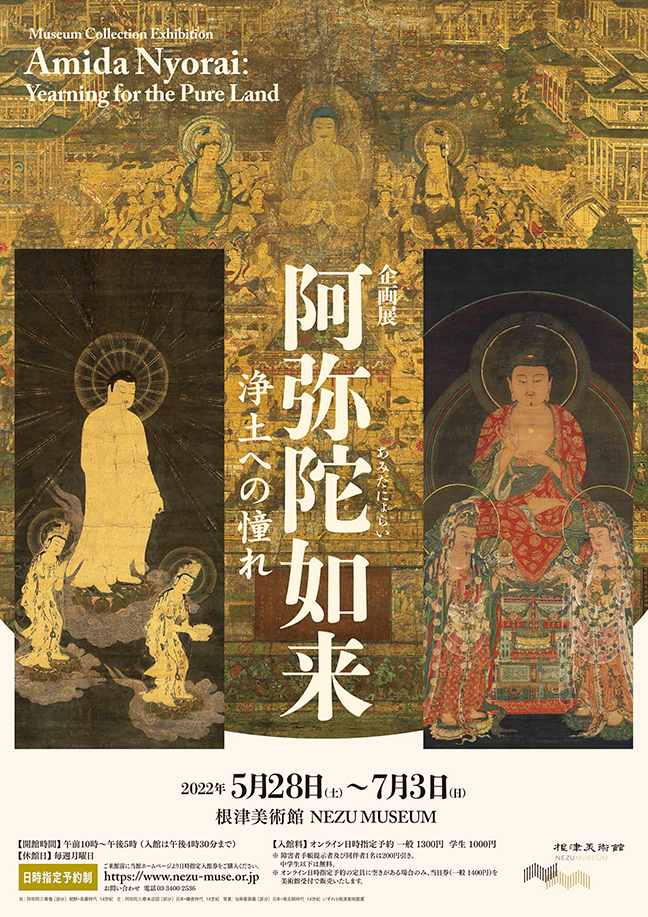 Familiar to almost every Japanese as “Amida-sama,” Amida Nyorai (Amitābha) was already an object of faith in the Asuka period (550-710). With the rise of Pure Land (Jōdo) Buddhism, this Buddha became seen throughout Japan as a savior who led people to rebirth in the Pure Land. As Buddhism evolved in Japan, faith in Amida Nyorai took on many aspects, and this Buddha became one of the pillars of Buddhist art. The focus of this exhibition is Buddhist paintings from the Nezu Museum collection, chosen to provide an overview of the history and spread of belief in Amida Nyorai in Japan. The exhibition also includes works from the Korean kingdom of Goryeo. Amida Nyorai: Yearning for thee Pure Land will thus be an opportunity to learn more about the gorgeous and varied worlds of art related to Amida Nyorai. 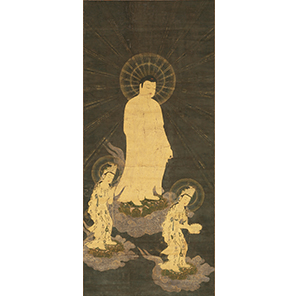 Descent of Amida (Amitābha) Triad
Japan Kamakura period, 14th century
Nezu Museum
The Descent of Amida
In this painting, Amida Nyorai, accompanied by the bodhisattvas Kannon (Avalokiteśvara) and Seishi (Mahāsthāmaprāpta), riding on a white cloud, descends to lead the spirit of someone on his deathbed to the Pure Land. Many similar paintings with the descent of Amida as their subject were produced from the Kamakura period (1185-1333) on. The compassionate expressions of the figures in the triad suggest their celebration of rebirth in the Pure Land. 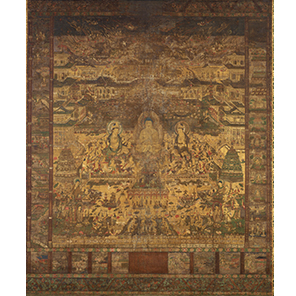 Taima Mandara (Imagery from the Contemplation Sutra)
Japan Nanbokuchō period, 13th century
Nezu Museum
Scenes of the Pure Land
With the rise of the Pure Land sect of Buddhism, the Taima Mandala, which was handed down in the Taimadera Temple in Nara, was copied many times from the Kamakura period (1185-1333) on. It depicts Amida’s Pure Land as described in the Kanmuryōjukyō Sutra (Contemplation Sutra). In addition to the Amida Triad and other bodhisattvas, this mandala depicts towers, the seven sacred treasures, and other aspects of the Pure Land in gold pigment and rich color, in a magnificent depiction of paradise. 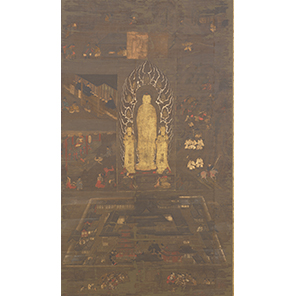 Legends of Zenkō-ji Temple
Japan Kamakura period, 13-14th centuries
Nezu Museum
The Popularization of Faith in Amida
As belief in the Pure Land grew strongly in the latter half of the Heian period (794-1185), so did faith in Zenkō-ji Temple, in Shinano province (today’s Nagano prefecture). This work, the central scroll in a triptych of hanging scrolls depicting the legends of the temple’s founding, presents the temple and the Amida Triad, its principle objects of worship, in large scale. 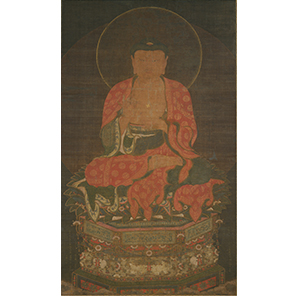 Amida (Amitābha)
Korea Goryeo period, dated 1306
Nezu Museum
Amida Nyorai in Goryeo
This Amida Nyorai from Goryeo-period Korea, depicts the vivid red and green robe and its detailed motifs, with lavish use of gold pigment. A famous work that presents the sophisticated skills of the Goryeo court painters at that time, this painting is also of great historical significance, for it was created to pray for the safe return of King Chungnyeol, the Goryeo king, from Dadu, the Yuan-dynasty capital of China.