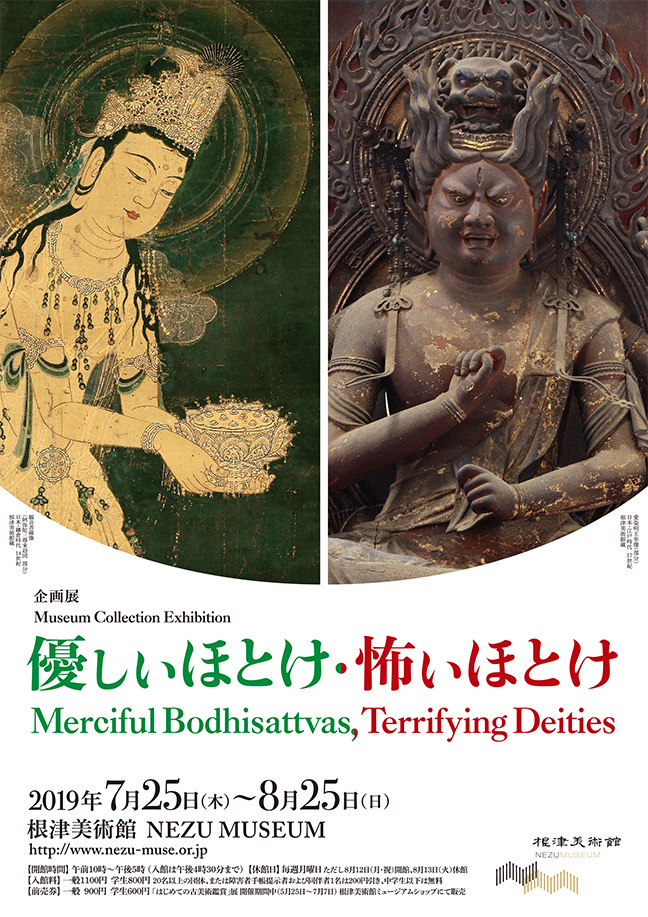 This Merciful Bodhisattvas, Terrifying Deities exhibition presents approximately thirty-five superb examples of Buddhist painting and sculpture from the Asuka through the Edo periods (from the 7th to the 17th centuries). It provides an opportunity to consider the expressions on these divine beings’ faces and the meanings conveyed by them. Buddhist divine beings can be divided into three types in terms of their forms and functions. One is the solemn nyorai (buddha), who embodies the truths of Buddhism. A second is the compassionate bosatsu (bodhisattva), who rescues people from suffering and grants them happiness and peace. The third type includes the furious deities such as myōō or wisdom kings, who subdue those who do not follow the teachings and enemies of the Dharma. Ten (deva) such as the Shitennō (Four Heavenly Kings) are also part of the third type. People sought peaceful lives in this world by praying to the noble Shaka-nyorai (Śakyamuni), seeking aid from the compassionate Kannon-bosatsu (Avalokiteśvara), surrendering delusions and evil thoughts to the rage of Fudō-myōō (Acala), and turning to Bishamon-ten (Vaiśravana, one of the Four Heavenly Kings) for comfort. 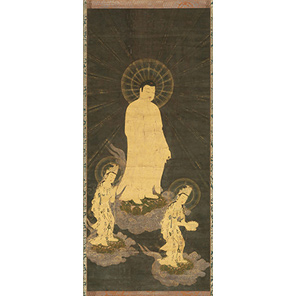 Descent of Amida-nyorai (Amitābha) Triad
Hanging scroll; ink and color on silk
Japan Kamakura period, 14th century
Nezu Museum
When those who have lived good lives in this world die, Amida-nyorai with attendants, such as Kannon-bosatsu and Seishi-bosatsu, appear, place the deceased person’s spirt on a lotus blossom, and carry it to the Western Pure Land, Amida’s Buddhist paradise. The gentle expressions on these three divine beings’ faces welcome the transition from the fear of death to the joy of rebirth in paradise. 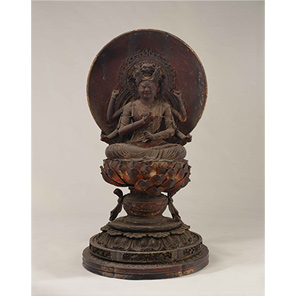 Seated Aizen-myōō (Rāgaraja)
Wood with polychromy
Japan Edo period, 17th century
Nezu Museum
Everything about Aizen-myōō (Rāgaraja) expresses the horror of the corrupt thoughts that defile the hearts of mankind. The body is bright red, the three eyes are open wide, and anger makes the hair stand on end. Aizen-myōō is worshiped as the principal Wisdom King for the ritual that reverses those negative forces and grants harmony and good fortune. This statue is being displayed for the first time after its restoration. Bishamon-ten (Vaiśravaņa)
Hanging scroll; ink and slight color on paper
Japan Heian period, 12th century
Nezu Museum
The Four Heavenly Kings are Buddhist Dharma protectors of the four directions, in the form of warriors. Vaiśravana, one of this group, is in charge of the north and is worshipped particularly intently. It is called Bishamon-ten when represented as a single figure. On the face, muscles bulging, the eyes are open wide, glaring at the surroundings. Kongōyasha-mｙōō (Vajrayakşa), from The Five Great Wisdom Kings (Vajra-rājas)
Hanging scroll; ink and color on silk
Japan Kamakura period, 13th century
Nezu Museum
The being depicted here once was a ferocious demon that devoured human beings. Reformed by the Buddhist teachings, it was transformed into a benevolent deity, one of the Great Myōō or Wisdom Kings, manifesting its power to destroy evil things and spirits. The major distinctive characteristic of this fantastic deity is its having five eyes open on three faces.