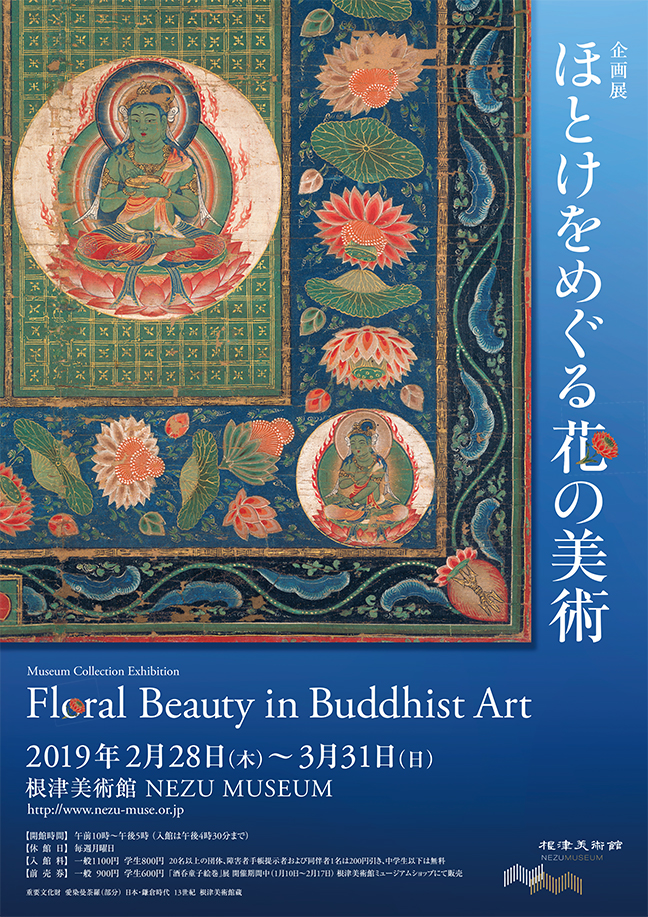 The lotus, which rises from the mud to produce its pure blossoms, which do not touch the water, is known as the renge, the flower that symbolizes Buddhism. This exhibition, Floral Beauty in Buddhist Art, presents a glorious collection of flowers depicted in more than thirty Buddhist paintings: the lotus, the ashoka tree and the sal tree, which watched over Śakyamuni throughout his lifetime, plus the precious flower pattern, the imaginary jeweled tree, and the cherry, which blooms in Japan’s sacred places. They are joined by about ten Buddhist implements decorated with lotus blossoms, including sutra boxes, pendant ornaments, and flower petal baskets. With visual images wrapped in flower blossoms, the Buddhist teachings carved a vivid impression on human hearts and were disseminated widely. 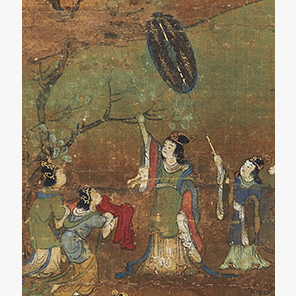 Eight Episodes in the Buddha’s Life (Detail）
Ink and color on silk
Hanging scroll; ink and color on silk Japan Kamakura period, 13th century MOA Museum of Art
Queen Maya has stopped at a beautiful garden in Lumbini, on the way to her parents’ home to give birth. Her hand is reaching for a flowering branch of the ashoka tree as her son, the prince Siddhartha, is born from her right side. That was the birth of Śakyamuni, the historical Buddha. 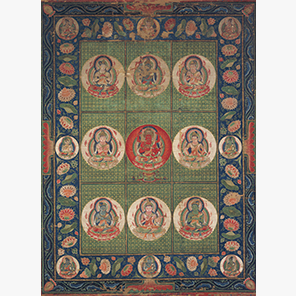 Aizen (Rāgarāja) Mandala
Hanging scroll; ink and color in silk Japan Kamakura period, 13th century Nezu Museum
This mandala, a focus of devotion in esoteric Buddhism, expresses a prayer for harmony among human beings. Visible around the perimeter of the mandala are lotus arabesques between the offering bodhisattva, plus red lotus gate opening up in the four directions. The delicate coloring with its gilded decoration is superb. Kannon (Avalokiteśvara)
Hanging scroll; ink and color on silk Japan Kamakura period, 13th century Nezu Museum
The Buddhist deity most familiar for holding a lotus blossom is the bodhisattva Kannon (Avalokiteśvara). The blossom associated with this icon is referred to as a bud about to burst into bloom. In this example, the red lotus pedestal supporting Kannon makes a striking impression within the white lunar disk. 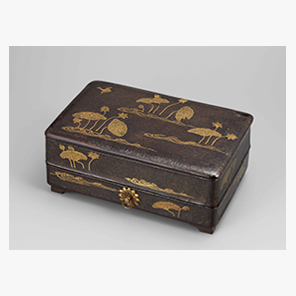 Sutra Box with Lotus Pond
Makie-lacquer on wood Japan Heian period, 12th century Nezu Museum
This sutra box has two layers. Its upper surface and sides are decorated with lovely lotus blossoms, their leaves and flowers reaching above the calm surface of the water, in the polished makie technique. Both its style, with the generous arrangement of the simple design, and the type of gold powder used indicate this work’s great age.