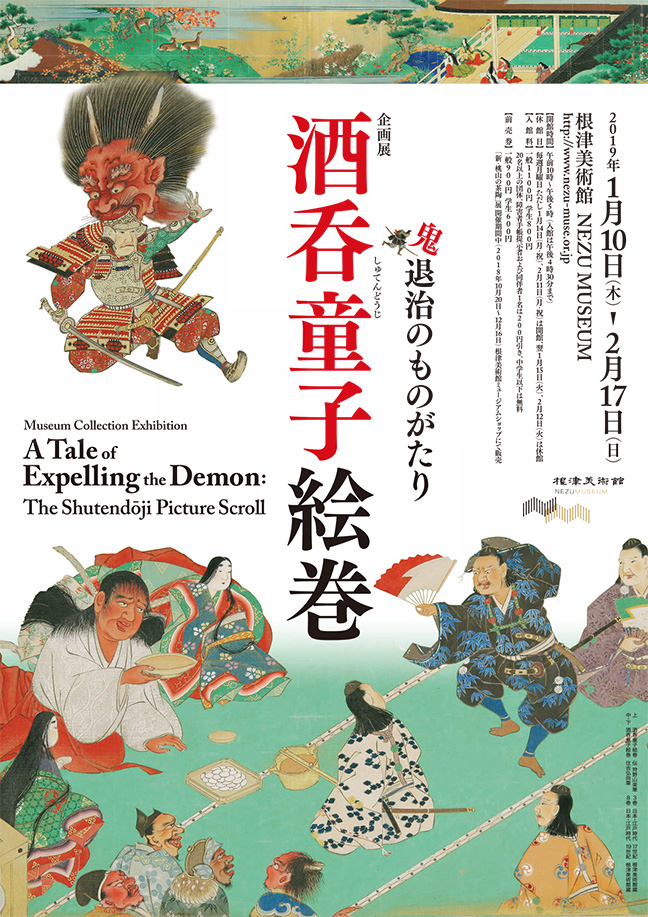 Shutendōji was a demon who repeatedly abducted the daughters of aristocratic families in Kyoto. The story of how Minamoto no Yorimitsu (Raikō), Fujiwara no Yasumasa and the Four Paladins, including Watanabe no Tsuna, and Sakata no Kintoki, expelled the demon appeared in the fourteenth century and was widely depicted in picture scrolls as well as the illustrated books known as Nara ehon. Tradition is divided over the question of whether the demon's home was on Mt. Ōe or Mt. Ibuki. All three sets of Shutendōji picture scrolls in the Nezu Museum collection are in the Mt. Ibuki tradition and were painted in or after the sixteenth century. Each of the scrolls differs, however, in style and date of production. Among them, the eight-scroll version painted in the nineteenth century by a Sumiyoshi School artist is unique in devoting four of the scrolls to the demon's backstory. All eight scrolls are being shown together for the first time. Please enjoy exploring the stylistic differences between them. 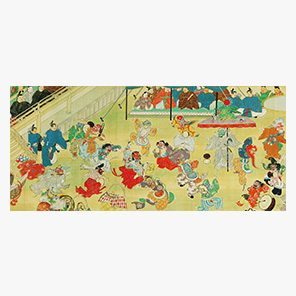 Shutendōji Picture Scrolls
By Sumiyoshi Hironao
Ink and color on silk
Japan Edo period, 19th century
Nezu Museum
The demon, the son of the daughter of a district governor in Ōmi (now Shiga prefecture) and the deity Ibuki Myōjin, began drinking at the age of three. His drunkenness led to his being sent to Mt. Hiei to undergo Buddhist training. Under the direction of the prominent Buddhist priest Dengyō Daishi, he did stop drinking. One day, however, he was invited to don a demon costume and dance at a court festival and was given sake as his reward. As he drank and danced, his true nature was revealed, and he was cast out of Mt. Hiei. In this scene, Shutendōji is the figure wearing the bright red mask (Scroll 3, Section 3). 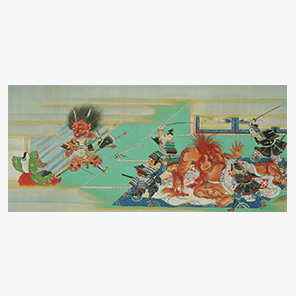 Shutendōji Picture Scrolls
By Sumiyoshi Hironao
Ink and color on silk
Japan Edo period, 19th century
Nezu Museum
Three Deities, the gods Sumiyoshi, Kumano, and Hachiman, give the Four Paladins, lead by Raikō, poisoned sake for Shutendōji. After the demon has been rendered blind drunk on the poisoned sake, the Four Paladins attack. Raikō cuts off the demon's head, which, while flying upward, tenaciously tries to bite Raikō's head. The helmet that the Three Deities had provided Raikō, however, blocks Shutendōji's counterattack. Compared with the Kanō School depiction of the same scene, the style here is subdued (Scroll 8, Sec-tion 2). 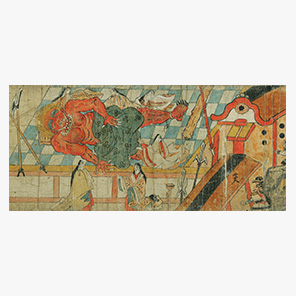 Shutendōji Picture Scrolls
Ink and color on paper
Japan Muromachi period, 16th century
Nezu Museum
Unaware that Raikō and the Four Paladins are approaching, the demon is asleep and snoring loudly, surrounded by his many women. Sleeping with his mouth wide open, he looks rather appealing (Section 5). 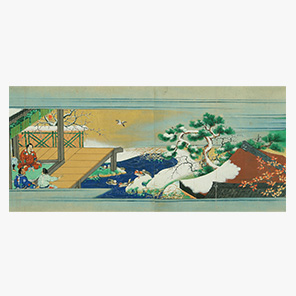 Shutendōji Picture Scrolls
Attributed to Kanō Sanraku
Ink and color on paper
Japan Edo period, 17th century
Nezu Museum
The garden of Shutendōji's palace is surrounded by the four seasons unfurling in the four directions. It was typical of this artist to work in an elaborate bird-and-flower style, even in paintings depicted within his paintings (Middle Scroll, Section 2).