Lidded containers for incense called kōgō are one of the most popular utensils used at tea gatherings.
In the beginning, Chinese lacquerwares were used as incense containers, but with the growing popularity of tea culture the latest domestic ceramics, such as Kiseto and Shino wares, as well as old lacquer boxes with gold makie and mother-of-pearl inlay designs and new Chinese wares such as blue-and-white ceramics and celadons were also adopted for used in tea gatherings. These containers were made from a wide range of materials, from lacquer to ceramics, and their shapes were also richly varied, limited not only to round and square containers, but even taking the form of animals and musical instruments. No other tea utensils are as diverse in form as incense containers.
This exhibition features approximately 170 incense containers that show how their world blossomed. We hope that you will enjoy these charming small vessels that adorned the tea space. 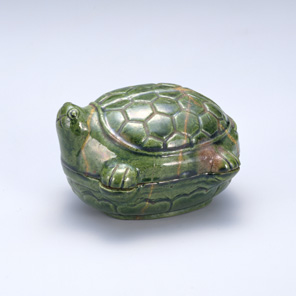 Turtle-Shaped Incense Container
Zhangzhou ware group, kōchi type
Glazed stoneware
China Ming dynasty, 17th century
Nezu Museum
Kōchi-type ware was a low-fired tricolor ware produced in the vicinity of Zhangzhou in China’s Fujian province. Kōchi lidded containers in the shape of animals or plants were admired in Japan as incense containers. The large turtle is a particularly popular shape. On this one, the slightly upraised face, with its large, round eyes and carved cross for a mouth, is particularly charming. Incense Container with Chrysanthemum Design
Makie lacquer on wood
Japan Muromachi period, 15th-16th centuries
Nezu Museum
This is a small container for fragrant incense that was originally stored inside a cosmetic box. Along with small cases for tooth blackening and white face powder, these began to be adopted for use as incense containers for tea gatherings from the end of the 16th century onward. Since they were lined around the rim with tin and other metals, they are also called suzubuchi (tin-rimmed) kōgō. The outer surface of the lid is decorated with a chrysanthemum flower design rendered in gold makie lacquer. Incense Container with Guri Design
Carved lacquer on wood
China Yuan dynasty, 14th century
Nezu Museum
The surface of this incense container has been coated with multiple layers of lacquer that have then been carved out to create the design. In Japan, the spiral pattern is known as guri design. The carved edges reveal the multicolored layers of lacquer below the surface. Jewel-Shaped Incense Container
Mino ware, kiseto type
Glazed stoneware
Japan Momoyama period, 17th century
Nezu Museum
This masterpiece of Kiseto ware is renowned for its plump form and the dry feel of the glaze, known as aburage-de. Chalcanthite (a type of mineral formed from copper sulfate) applied at the very top of the piece gives it the brilliant green color. 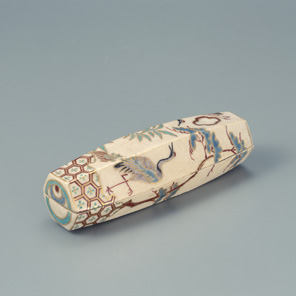 Incense Container with Crane and Turtle Design
By Nonomura Ninsei
Stoneware with overglaze enamels
Japan Edo period, 17th century
Nezu Museum
The long and slender six-sided form is modeled in the shape of a wooden mallet that was used in a ball-and-mallet game called buriburi gitchō. This incense container is decorated with pine, bamboo, and plum, cranes and turtles, jewels, and other auspicious images in colorful overglaze enamels. Gong-Shaped Incense Container
Attributed to Raku Sōnyū
Glazed earthenware
Japan Edo period, 17th-18th centuries
Nezu Museum
The waniguchi, or “alligator mouth” gong, was a Buddhist ritual instrument that was hung at the front of Buddhist halls and struck in the center to produce a sound. This miniature reproduces the eyelets where string was passed through to hang the gong, as well as the opening in the bottom half that formed the space for the sound to resonate. Shell-Shaped Incense Container
By Eiraku Hozen
Porcelain with underglaze cobalt
Japan Edo period, 19th century
Nezu Museum
This is a copy of an old blue-and-white shell-shaped incense case from Jingedezhen, China, made in the late Edo period by the Kyoto ceramic artist, Eiraku Hozen. Old blue-and-white and kōchi-type wares were very popular and copies of such wares were made at various kilns throughout Japan. Incense Container
Lacquer on bamboo
Japan Edo period, 17th-19th centuries
Nezu Museum
The technique of applying red lacquer over black is called negoro lacquerware. This type of flat, cylindrical lidded box was known as ichimonji (straight line) shape and was influenced by Chinese lacquer craft. A crack in the body has been repaired with a metal staple.