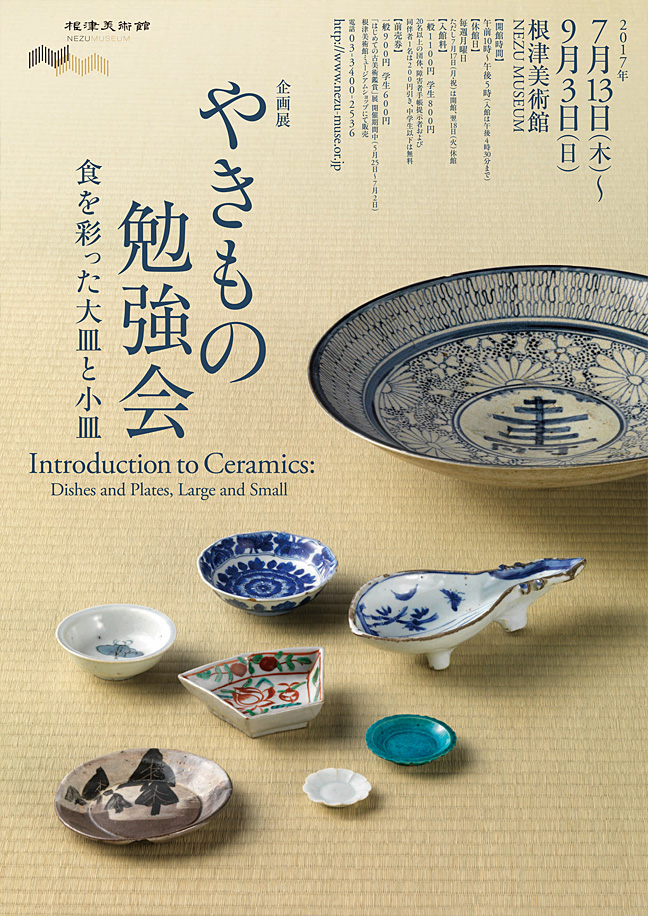 The current “Introduction to Ceramics” exhibit focuses on dishes that were used in everyday life, examining the culture of using large and small dishes as tableware and considering the periods during which this was done. When, for example, did people start to use plates? And around what time period did the culture of displaying and serving food at meals appear?
Demand for large dishes arose in the countries of the Near and Middle East in around the 14th century and they were brought in from China. At the same time, within the food culture of Japan, where small tables such as individual kaiseki meal trays were used, a wide variety of small plates with decorated with traditional nature themes stand out. We hope that you will enjoy this display of large and small Chinese and Japanese ceramic dishes as they weave the tale of the history of eating culture. 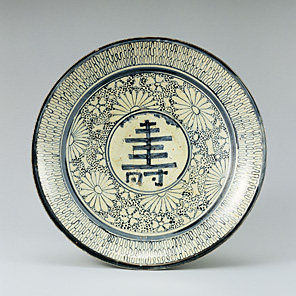 Dish with the Character Ju (Longevity)
Hizen ware
Porcelain with underglaze cobalt
Japan Edo period, 17th century
Nezu Museum Gift of Yamamoto Masayuki
Plates with a small foot and widely flaring shape extending outward toward the rim were popular throughout the Hizen region in the early 17th century not only in Arita, but also in Karatsu and Takeo. From there, they were transported as far as distant Aomori. 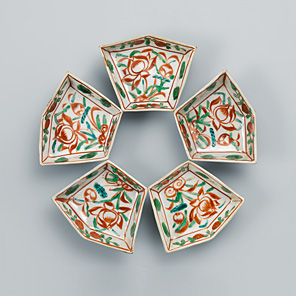 Five-Sided Dishes
Zhangzhou ware group
Porcelain with overglaze enamels
China Ming dynasty, 17th century
Nezu Museum
Originally, in China, there would have been eight of these five-sided dishes that were connected together to form a ring and placed inside a box for serving. The dishes can be used individually as well, but they also look nice arranged like petals of a flower. 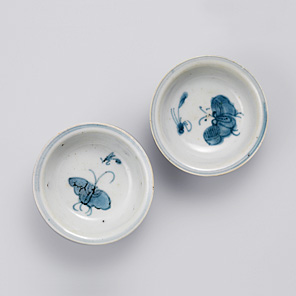 Dishes with Butterfly DesignJingdezhen ware group
Porcelain with underglaze cobalt
China Ming dynasty, 17th century
Nezu Museum
These dishes each have a large image of a butterfly with one small insect flying above. Details such as the shape of the rim, which is flattened like the shape of a sword guard, suggest that they may have been commissioned by Japanese patrons. 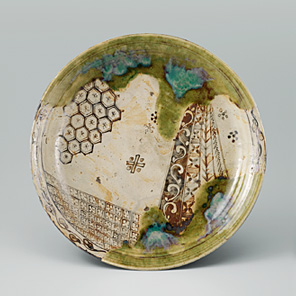 Large Ｐlate
Mino ware, oribe type
Stoneware with underglaze iron
Japan Edo period, 17th century
Nezu Museum
The distinctive green glaze of Oribe ware is applied over the rim of the plate and scattered floral designs are painted over it in iron. Plates glazed in this way were also produced in large numbers at the Takeo kilns in Kyūshū at around the same time.