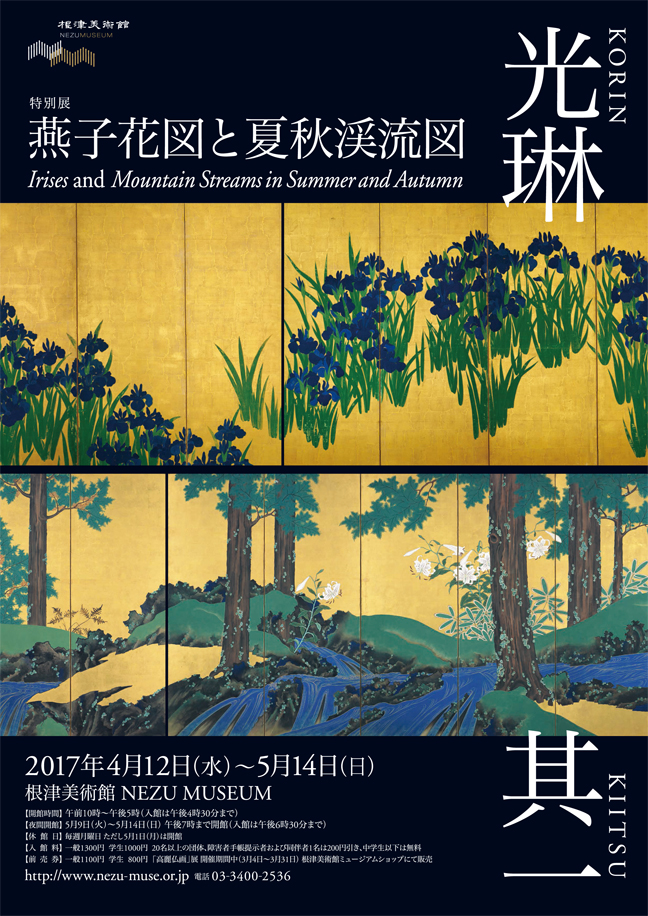 This exhibition features two great masterpieces of Rinpa painting: the National Treasure Irises screens by Ogata Kōrin (1658–1716) and the Mountain Streams in Summer and Autumn screens by Suzuki Kiitsu (1796–1858).
The iris flowers against a flat background in Kōrin’s Irises screens offer the impression of a pattern on a costume, while at the same time giving off a sense of lively vitality. In contrast, the Mountain Streams in Summer and Autumn screens present a scene of mountain streams flowing through cypress groves highlighted by lilies and a cherry tree with a few red autumn leaves that at first glance seems casually unassuming, but that also appears somehow strangely unreal. However, commonalities between these works can be detected in features such as the rhythmical feel of the motifs and the brilliance of the blues and greens against the gold ground.
This exhibition will present a number of gold screens of the Rinpa School along with works produced from Kiitsu’s time in the first half of the 19th century through the beginning of the 20th century. 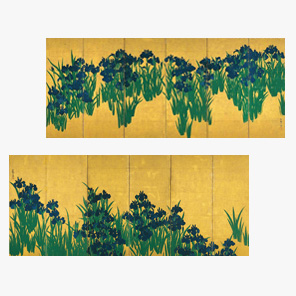 IrisesBy Ogata Kōrin
Japan Edo period, 18th centuryNezu Museum
On a pair of six-panel folding screens of solid gold ground, this mass of iris flowers is painted strikingly in only varying shades of azurite blue and malachite green. The design is arranged rhythmically in carefully calculated contrast between the left and right screens. The subject is ascribed to the scene of Yatsuhashi, the “Eight Bridges,” a place famous for its irises that is celebrated in the Tales of Ise, Episode 9. 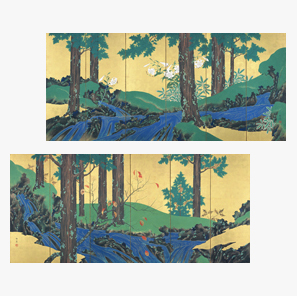 Mountain Streams in Summer and AutumnBy Suzuki Kiitsu
Japan Edo period, 19th centuryNezu Museum
Here we see a mountain stream flowing through cypress groves. The right screen presents a summer scene with lilies in bloom and the left screen presents an autumn scene with the leaves of a cherry tree dyed a deep crimson. The amebic creeping of the flowing stream in azurite and gold, the expression of the moss that seems to multiply before the eyes, and the cicada that rests on a tree in full profile, all contribute to a feeling of almost hyperrealism in the image. 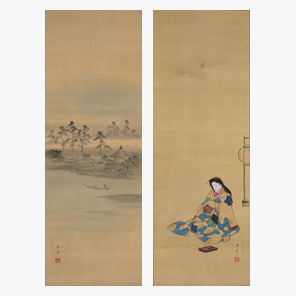 Lady Takao and the Boats to Yoshiwara QuarterBy Utagawa Hiroshige
Japan Edo period, 19th centuryNezu Museum
Utagawa Hiroshige (1797–1858) was an artist who lived during the same period as Kiitsu. This is one of a group of original hand-painted works commissioned of Hiroshige by the Tendō domain in Yamagata to be given to merchants who had supplied funds to the domain. 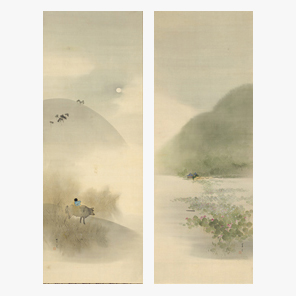