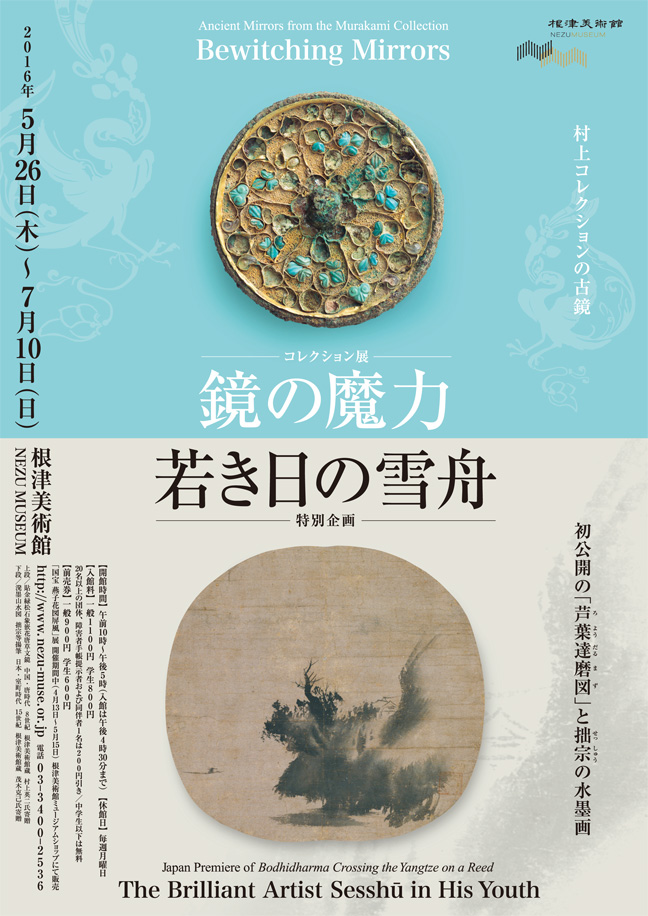 【Gallery1】Mirrors have a long history. In China, the first bronze mirrors were made during the Neolithic period. Mirrors were regarded as spiritual entities able to reflect the depths of human souls. Given the mirrors’ symbolic significance, the patterns on the backs of these mirrors embodied the world views and wishes of their times. For this exhibition, we have selected 60 notable examples from the collection of ancient Chinese mirrors donated to the museum by Murakami Eiji in 2010. In the patterns on their backs we can see the origins of heaven and earth, the world of the gods and immortals, and wishes for good fortune in this world, including long life and many descendants.

【Gallery2】Sesshū Tōyō is the exemplary artist-monk of the Muromachi Period. It has gradually become clear that until his late thirties, he used the name with the same pronunciation but written in different characters (拙宗等揚 instead of 雪舟等楊). One of his works from his younger period, Bodhidharma Crossing the Yangtze on a Reed, was long thought to be lost, but was rediscovered in America and restored in Japan. It is included in this exhibition, in which it is being displayed in Japan for the first time. This exhibition thus offers the first opportunity to broaden our understanding of Sesshū by focusing on his work in his youth as well as his later work . 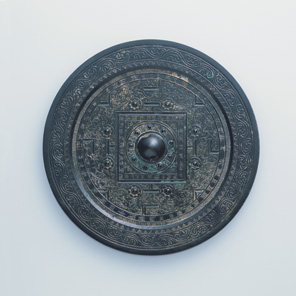 Mirror with TLV Pattern and Four Sacred Animals
China Western Han-Xin dynastiesNezu Museum Gift of Murakami Eiji
The composition of the decoration on this mirror, a combination of circle and square, represents Chinese cosmology: “Heaven is circular, the Earth is square.” 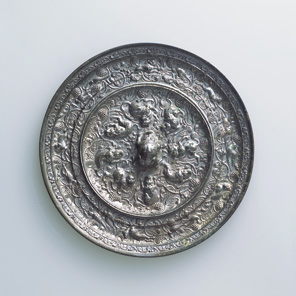 Mirror with Lion-like Beasts and Vines
China Tang dynasty, 7th centuryNezu Museum Gift of Murakami Eiji
During the Tang dynasty, many patterns with their roots in Western Asia were used in mirrors. The patterns in this mirror all clearly originated in the western regions. Note, in particular, these exotic mythical creatures, whose form is influenced by the Western Asian depiction of lions. The use of grape vines symbolizes fecundity, rich harvests, and numerous descendants. 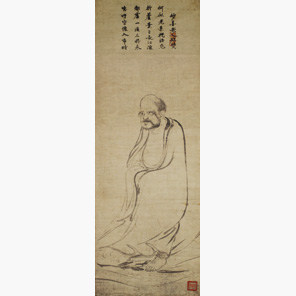 Bodhidharma Crossing the Yangtze on a ReedBy Sesshū Tōyō
Japan Muromachi period, 15th centurySmith College Museum of Art, Northampton, Massachusetts, Gift of Peggy Block Danziger, class of 1962, and Richard M. Danziger
Now being shown for the first time in Japan, this major work is thought to have been painted between about 1454, when Sesshū moved from Kyoto to the Yamaguchi region in the western part of Japan, and 1462, the year in which the Zen priest Jikushin Keisen, who wrote the inscription on it, died. 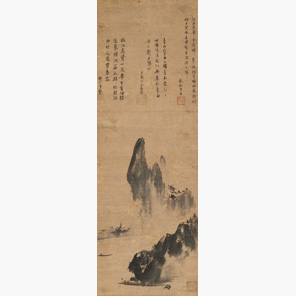 Landscape in Splashed-ink StyleBy Sesshū Tōyō Inscription by Isan Shūshō
Japan Muromachi period, 15th centuryMasaki Art Museum
Sesshū continued to use the dynamic brushwork with which he created these craggy mountains until the end of his life. The Zen priest who wrote the inscription was the son of a powerful daimyo in the Chūgoku region of western part of Japan and may have involved in Sesshū’s decision to move to Yamaguchi, in that region.