The exhibition “Buddhist Teachings, for All Eternity” presents masterpieces of sacred Buddhist paintings depicting Shaka-nyorai (Sakyamuni), Amida-nyorai (Amithaba), Dainichi-nyorai (Mahavairocana), Miroku-bosatsu (Maitreya) who will be nyorai in the future, and the Buddhist monks called Rakan (Arhats) who link the present with the future.

Transcending time and space, Buddhism unfolds as a world of faith in the nyorai, or awakened ones. They include the following: Shaka, who attained enlightenment living in this world as a human being; Miroku, who will be the next nyorai in this world when 5,670 million years have passed since Shaka’s death; Amida, who descends from the Western Pure Land when a human being dies; and Dainichi, who is an avatar of the core of absolute truth in Buddhism. In addition to the assorted imagery of these deities, one of the other highlights of the exhibition is the Shaka Triad and the Sixteen Arhats (19 scrolls from the collection of the Tokiwayama Bunko Foundation), which depict the sacred monks who protect the Buddhist faith in this world by extending their life until the appearance of Miroku. 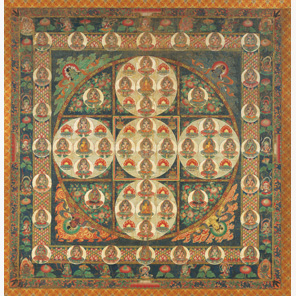 Kongōkai (Diamond Realm) Mandala with Eighty-One Deities
Japan Kamakura period, 13th century Nezu Museum
A mandala illustrating the Perfected-Body Assembly (JP: jōjinn-e). This is the nucleus of a Diamond Realm Mandala representing the principles of the Diamond-Summit (Vajrasekhara) Sutra. The eighty-one systematically ordered deities illustrate how to attain the Dainichi-nyorai (Mahavairocana) state of mind, in other words, the process of attaining Buddhahood in the present body. 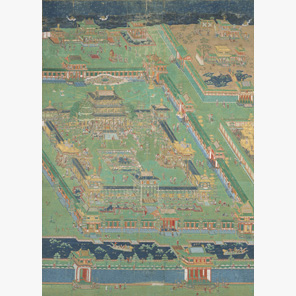 Tosotsuten (Tusita) Mandala
Japan Kamakura-Nanbokuchō periods, 14th century  Nezu Museum
This scroll depicts Miroku-bosatsu (Maitreya), the Buddha of the future, as an inhabitant of Tosotsuten (Tusita heaven). Miroku is seated in a chamber of the main hall, surrounded by a number of bodhisattvas. Golden light rays are emanating from his body and from the sacred jewels placed on the upper levels of the building. It is a graceful work set off by delicate gold-leaf patterns on green and blue coloring. 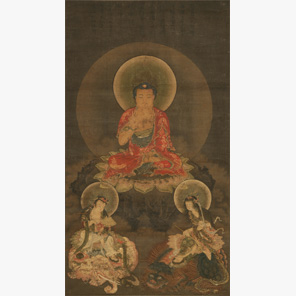 Shaka (Sakyamuni) Triad
Japan Nanbokuchō period, 14th century  Nezu Museum
Wearing a red robe, Shaka (Sakyamuni) is positioned on a lotus formed from heavily laden stamens resting on flower petals. This work is notable for its Chinese style exemplified by the elaborate depiction of the robe. 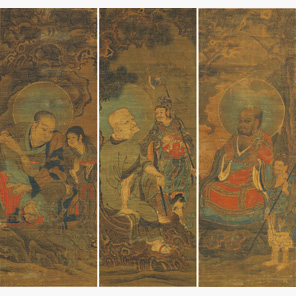 Shaka Triad and the Sixteen Arhats
Japan Kamakura period, 13-14 centuries  Tokiwayama Bunko Foundation
This image of the Rakan (Arhats), whose divine powers allow them to continue to dwell in this world, usually depicts miracles, including the taming of wild animals, with the emphasis on representing their longevity as seen in these examples.